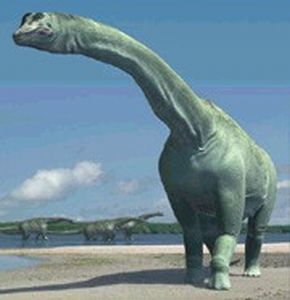 Turiasaurus (meaning "Turia lizard"; Turia is the Latin name of Teruel) is a genus of sauropod dinosaur from the Jurassic-Cretaceous boundary. It is believed to be the largest dinosaur ever found in Europe, and is among the largest dinosaurs known (exceeding 30 meters, or 98 ft in length), with a weight of 40 to 48 tons,[1] the combined weight of six or seven adult male elephants.

Fragmentary remains of this animal, including an articulated left forelimb (holotype), skull fragments, teeth, vertebrae and ribs, have been found in terrestrial deposits of the Villar del Arzobispo Formation of Riodeva (Teruel Province, Eastern Spain). The type species, Turiasaurus riodevensis, was formally described by Royo-Torres, Cobos & Alcala, in 2006.[1]

Credit to Wikipedia for the article.

Retrieved from "https://paleontology.fandom.com/wiki/Turiasaurus?oldid=5483"
Community content is available under CC-BY-SA unless otherwise noted.