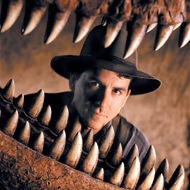 Paul Callistus Sereno (born October 11, 1957) is an United States paleontologist who is the discoverer of several new dinosaur species on several continents. He has conducted excavations at sites as varied as Inner Mongolia, Argentina, Morocco and Niger. He is a professor at the University of Chicago and a National Geographic "explorer-in-residence." The son of a mailman, Paul grew up in Naperville, Illinois.

Sereno's most widely publicized discovery is that of a nearly complete specimen of Sarcosuchus imperator (popularly known as SuperCroc) at Gadoufaoua in the Tenere desert of Niger. Other major discoveries include Eoraptor, Jobaria, Deltadromeus, the first good skull of Carcharodontosaurus, Afrovenator, Suchomimus and the african pterosaur.

Retrieved from "https://paleontology.fandom.com/wiki/Paul_Sereno?oldid=4525"
Community content is available under CC-BY-SA unless otherwise noted.