Iguanodon (meaning "Iguana tooth") is the name given to a genus of ornithopod dinosaurs, which lived roughly halfway between the early hypsilophodontids and their ultimate culmination in the duck-billed dinosaurs. They lived between 120 to 140 million years ago, in the Barremian to Valanginian ages of the Early Cretaceous Period, although one dubious species is from the Late Jurassic. Iguanodon's most distinctive feature was a large 'thumb spike', probably used for defense against predators.Additional resource:

Ceratopsian crest as acoustic amplifier can be found in published work:

Iguanodon was the first dinosaur recognized and the second dinosaur formally named, described in 1822 by English geologist Gideon Mantell. Together with Megalosaurus and Hylaeosaurus, it was one of the three originally used to define the new classification, Dinosauria.

The various Iguanodon species are bulky herbivores, ranging from 6 to 11 metres (20 to 36 feet) in length, and averaging about 5 tonnes (5.5 tons) in weight. Iguanodon's thumb spikes were perpendicular to the three main digits. In early restorations, the spike was placed on the animal's nose. Later fossils revealed the true nature of the thumb spikes, although their exact purpose is still debated. It could have been used for defence, or for foraging for food.

Early fossil remains were fragmentary, which led to much speculation on the posture and nature of Iguanodon. Initially, Iguanodon was portrayed as a quadrupedal horn-nosed beast, in the mid-19th century. However as more bones were discovered, Mantell astutely observed that the forelimbs were much smaller than the hindlimbs. His rival Owen was of the opinion it was a stumpy creature with four pillar-like legs. The job of overseeing the first life size reconstruction of dinosaurs was initially offered to Mantell, who declined due to ill-health, and Owen's vision subesequently formed the basis on which the sculptures took shape.

Then, with the discovery of the Bernissart skeletons, its bipedal nature was revealed. However, it was depicted in an upright posture, with the tail dragging along the ground, acting as the third leg of a tripod. Since then, however, it has been depicted in a more horizontal though predominantly bipedal posture, with stiffened tail. Paleontologist David Norman proposes that mature Iguanodons may have been quadrupedal. 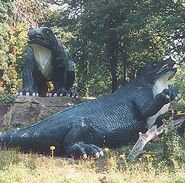 Benjamin Waterhouse Hawkins-designed Iguanodon statues, at Crystal Palace, based on the theories of Sir Richard Owen

Current reconstruction, with more horizontal bipedal posture.
Add a photo to this gallery

The story goes that Gideon Mantell's wife, Mary Ann, discovered the first tooth of an Iguanodon in the strata of Tilgate Forest in Cuckfield, Sussex, England, in 1822 while Mantell was visiting a patient. The tooth resembled that of an iguana, but was twenty times larger, so he named it Iguanodon or "iguana-toothed", from iguana and the Greek word odontos ("tooth"). His initial idea for a name was Iguanasaurus, however his friend Conybeare suggested the name was applicable to the iguana lizard itself, so a better name would be Iguanoides ("Iguana-like") or Iguanodon.

Based on isometric scaling, he estimated that the creature might have been up to 60 feet (18 metres) long. A better specimen was discovered in a quarry in Maidstone, Kent, England, which Mantell was able to identify, after acquiring it in 1834, as an Iguanodon, based on the tooth. The Maidstone slab allowed the first skeletal reconstructions and artistic renderings of the Iguanodon. The most famous mistake was the placement of a "horn", also discovered by Mantell's wife, on the nose of the dinosaur. The discovery of much better specimens of I. bernissartensis in 1878 in Belgium revealed that the horn was actually a modified thumb, perhaps used for defense.

Still encased in rock, the Maidstone slab is currently displayed at the Natural History Museum, in London. The borough of Maidstone commemorated this find by adding an Iguanodon to their coat of arms, in 1949.

I. anglicus was the original type species but the holotype was based on a single tooth and only partial remains of the species have been recovered since. In March of 2000, the International Commission on Zoological Nomenclature changed the type species to I. bernissartensis, which is known from dozens of skeletons found in Benissart (see below), some of which are very complete.

The largest find of Iguanodon remains occurred in 1878 in a coal mine at Bernissart in Belgium. With the encouragement of Alphonse Briart, supervisor of mines at nearby Morlanwelz, Louis Dollo oversaw excavation and reconstructed the skeletons. Some were publicly displayed from 1882. The completed restoration makes an impressive display in the Royal Belgian Institute of Natural Sciences, in Brussels. A replica of one of these is on display at the Oxford University Museum of Natural History. The original Iguanodon tooth is held at Te Papa Tongarewa, the Museum of New Zealand in Wellington, although it is not on display.

In 1989, I. lakotaensis was described based on a partial skull from Early Cretaceous beds in South Dakota. [1]

Iguanodon gives its name to the clade Iguanodontia, a very populous group with many species of Ornithopod from the mid-Jurassic to the Late Cretaceous.

Retrieved from "https://paleontology.fandom.com/wiki/Iguanodon?oldid=3937"
Community content is available under CC-BY-SA unless otherwise noted.